“I understand my art as a direct mirror of my own soul world. Thereby, the inner is conveyed fervently to the outside. The sounds that arise from the concert, which is sometimes quieter, sometimes louder, but always played in my heart, can be consciously felt and understood by the viewer when listening carefully.

As a recipient, you are invited to jump into the rapids of life, to explore the soulful ocean depths of being and to fulfill your heart’s longest desires as a composer of your own composition. Picturesque and with a poetic ambience, emotions are released which, like dewy drops of mist, have only been waiting to be kissed by the morning sun. You’re immersed in a world where everything seems possible.” 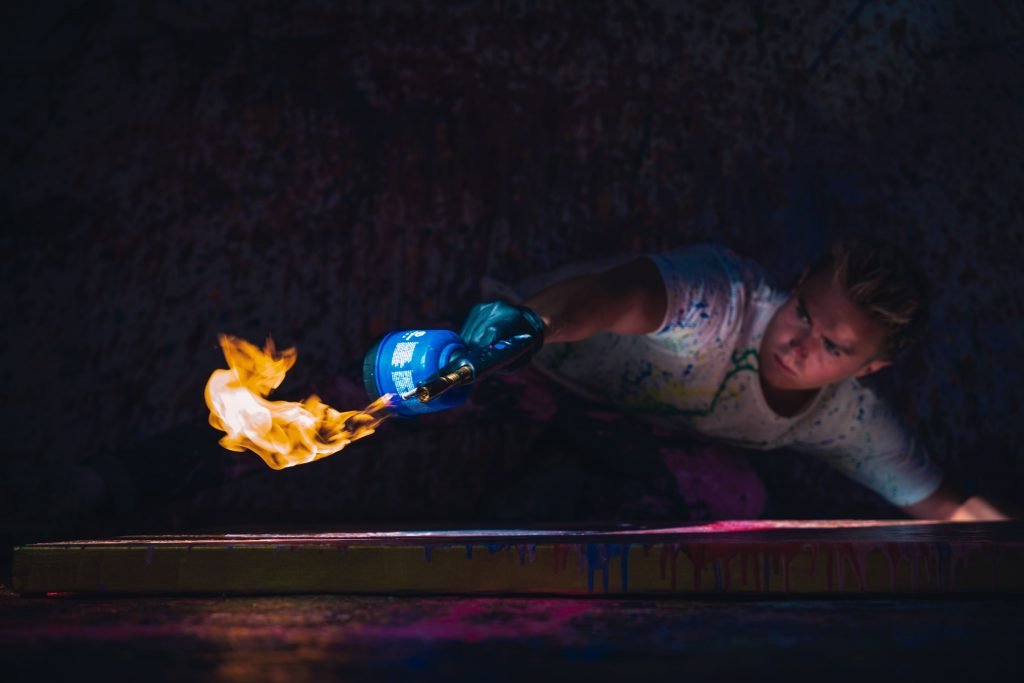 Steffen Schwien is a visual artist from Germany, whose expressionist paintings have touched the hearts of many recipients in national and international exhibitions over the past four years. His emotional signature, which is significantly reflected in his works and which is able to captivate the viewer, is not only well received by art historians and fellow artist. His “incomparable artistic character” and the ” expressivity and profundity of his paintings” were also honored by the jury at an art award ceremony.

Schwien’s engaging technique, based on the interplay of two elements, conveys the flow of his energy as he perceives it during the painting process, which is essential to him as a source of creativity: The omnipresent flow of life and its inherent driving fire, are symbolized by liquid colors and flaming Bunsen burners, which are used to create the dynamic color gradients and lively textures on the canvas. The authenticity of his artistic work is thereby distinctive for the recipient. The œuvre, which springs from Schwien’s innermost being and which he sees as the voice of his soul, not only reflects thoughts and above all feelings, but – like his series “Human” – can also convey political content.

The self-taught artist from Hamburg, who was born in Eutin in 1992 and has since been privileged to set up his studio in Ostholstein, has literally found the true meaning of his life in the visual arts. His powerful and at the same time harmonious expression resonates in peoples’ hearts, making it possible for him to return a piece of gratitude, positivity, love and joie de vivre to the world.